As the most comprehensive online events guide and resource for arts and culture in central Ohio, ColumbusArts.com offers a virtual guide through the Columbus art world with a searchable database of events, concerts, performances and more. ColumbusArts.com is an engaging place for artists and arts organizations to share what they do, with an average of 30,000 users per month. The ColumbusArts.com Artist Directory allows visual, performing and literary artists to create a profile and portfolio to showcase their work—for free—and enables art enthusiasts to easily search for and connect with them. Our monthly ColumbusArts.com artist profile series features interviews with a few of the many talented individuals who make up central Ohio’s thriving creative community. Local artist, Kat Marie Moya, of Columbus, is a self taught highly motivated go getter. Undoubtedly born to create, unmistakably creating to live, Kat shares her experiences and explores the experiences of others through her artwork.  GCAC's marketing intern, Kez Hall, recently interviewed Moya to learn more about her work.

GCAC: What is your inspiration; your driving force?

KMM: The inspiration for making my work varies greatly from piece to piece. I can't say there's a common denominator really, but perhaps the best way to answer this is to name a few pieces or series and what

inspired them. The Selective Superstition series was created in 2006-2007. I'd been thinking about the customization of superstitions and theories that govern our lives and individual philosophies. There were 10 pieces total, and not a single one of them was a superstition of my own. Each piece of the series took me through research that ultimately produced work that ended up connecting to people that recognized themselves in the piece and what it was about. The synchronistic occurrences that came out of that series drove me to create more work that would give air to creative conquest. Most recently I've been wrapping up a small series of contemplative works based on the marriage of simple words, titles or phrases and materials that change the direction one would interpret those words. This has been a very private endeavor. The series will be complete by this October, and at that point I'll be sharing it. My driving force comes from whatever inspires the work, and a very right-brained need to solve technical riddles in order to achieve it.

GCAC: How much influence did your father have on you becoming an artist?

KMM: My father was an art student at CCAD when I was a young child. I remember his projects around and what seemed like a large bank of interesting materials. I do not however recall an interest in the subject matter. Perhaps an early exposure to the world of making something out of nothing was enough for me. Beyond him making his projects and myself witnessing this, I don't believe he necessarily tried to steer my creativity. He stopped doing art at some point in my early childhood and went on to work at a factory. He never returned to art and this was something that disappointed me for a long time. I felt he had something special in his ability to create a message artistically but traded it in for something easier. Never the less, it was his life to live the way he wanted and who was I to assume I knew better for him.

GCAC: How long have you been making art?

KMM: Now that depends on what you mean by "art". I don't think I ever stopped making things in my whole life. The seriousness of my work has ebbed and flowed throughout my life and has always been subject to everything else that I was juggling at the time (ex; a child, tattooing career, many moves, relationships, changing beliefs, materials knowledge, etc). I wouldn't call all of it art, but all born out of some desire to project something at the time.

GCAC: Is your work currently being exhibited? If so, where?

KMM: No current exhibitions, just currently working for no particular exhibit in mind. I had work in two separate exhibits at La Luz De Jesus Gallery in Los Angeles this year, and I will share a piece with the Por Vida V 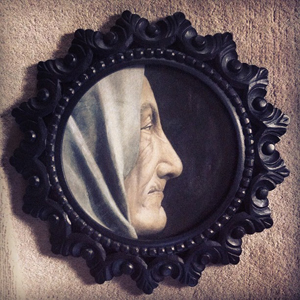 event here in Columbus in October (www.porvida614.com). Right now, I'm enjoying the peace of working out the new and private series, and hopefully opportunity comes knocking around the wrap up.

GCAC: What is your background and does it play a prominent role in your artwork?

KMM: I'm not quite sure what you mean by this. I have a religious, ethnic, criminal, and academic background to name a few. Born and raised Catholic but ousted by my belief in freedom of choice (among a great many other things). My ethnic make-up is German, Irish, Czechoslovakian, Jamaican, Cherokee Indian, and most recently discovered, French. I have a second degree misdemeanor on my record for climbing a tree that didn't want to be climbed and probably more than a few speeding tickets. I was awarded a full scholarship to CCAD but lasted three months when I realized I had to report for duty on a self-imposed secret spy mission across the U.S. with a variety pack of stinking squatters for nearly two years. I am self taught. All of these aforementioned background details sum up a little about my character. I'm somewhat delusional, but romantic and at times a danger to myself. Art was present with each and every adventure at one way or another.

GCAC: Name Three artists you would like to be compared to.

KMM: I would not like to be compared to anyone. That's not to say I believe I am that unique, but that I have not once followed the work of one person to a point that it could be evidenced in my art. Other people might think they could compare my work to others, but that might suggest that I even follow the work of the person/people that they think I might be trying to emulate. The only artist I have ever truly followed is Wassily Kandinsky and it's QUITE obvious that my work is nothing like his. I have always been in love with his ability to reach a visually compelling composition that reeks of his struggles or celebrations. I feel pain, anger, tragedy, and optimism when I study his paintings. He could not have planned his compositions or been overly methodical in any way, but instead all sensory and self guided by his own truths. That's powerful in a work of art, piece of music, or performance and it's exactly where the influence lies. I believe the effect is by default, and honest work is unmistakable. So my greatest influence is Kandinsky because his work exhibits conviction without the constraints of conventional methodology.

GCAC: If you could have any super power, what would it be and why?

KMM: I'd be a time traveling, teleporting, multi (as in every) lingual, memory erasing badass with the indestructible body-shape and wit of Mae West.  Does that really need any explanation?

To view work and learn more about Kat Marie Moya check out her artist profile at ColumbusArts.com and her own website at KatMarieMoya.com.

Top: In God We Trust, Rosary made of American currency grouped together by the last 5 decades. *For Selective Superstition, Mahan Gallery, 2008 Photo by Greg Holston

Bottom: Homage to the Unknown Soldier, Acrylic on board. Based on a facial reconstruction of a "mystery woman" by the evidence of how she lived as told by her bones. She was one of the first settlers of the Chesapeake colonies. *Most recent piece, made for Por Vida V. Photo by Kat Marie Moya