Art Serves as Family's Lifeline During a Difficult Time

In August of 2008, at just 20 months old, Joshua Riederer was diagnosed with a Wilm's tumor, a rare cancer of the kidney that primarily affects children.  Throughout his months of diffcult treatment at Nationwide Children's Hospital, Josh's passion for art and creating it gave him the chance to forget about his troubles and to feel like just a kid, having fun.  Josh's mom, Melissa, reflects here on the joy and healing that art brought to her family during the toughest time in their lives.  Josh is now a strong and healthy four-year-old boy and just celebrated his first illness-free birthday in December. 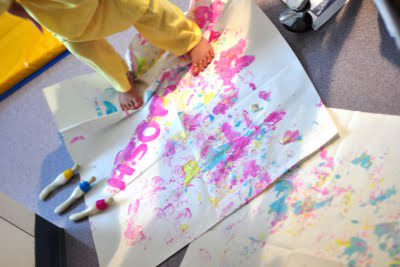 For our family, using art as therapy was simple. We'd wait for the sounds of the hospital's Art Cart coming to the pediatric oncology floor. If you were in a room near the front of the unit, you couldn’t miss the sound of its wheels bumping over the small hump near the doors. The teenaged Art Cart volunteers always loved when Josh would stand in his door, patiently waiting for the cart to roll to his room. "Mommy it's the Art Cart! The Art Cart is COMING!!!!!!" The whole floor then knew the cart had arrived, as Josh only had one volume when it came to the Art Cart. Josh wanted one thing and one thing only, a new wooden toy to paint.

Over the course of two years of hospital admissions we have accumulated several slithering snakes, a pair of motorcycles, a helicopter, a fish, a dinosaur, an alligator, an elephant, a treasure box and Josh's most prized art project— a handmade wooden bus that has functioning wheels. In lieu of a wooden object to paint we would get a large sheet of paper to paint and odds and ends to smash into the wet paint, feathers, sparkles, gems, anything that could use the paint like glue.

The arrival of the Art Cart was the one thing he always looked forward to each day, the one thing that would upset him if they accidentally skipped our room. The first thing he wanted to tell his sister about when we got home—his new art project.

Even on the days he couldn't get out of the bed from pain and fatigue, he would still pick out an art project, even if he didn't feel up to completing it.

During an in-patient admission--one of our extended hospital stays for treatment--Josh finally went stir crazy. He had never had trouble being cooped up in a hospital room for a week, but that week was different. One afternoon, a donated art kit provided to us by child life services was our salvation. It was a color change paper and paint set. I squeezed all the paint out and lined up the papers across the floor, securing them with spare medical tape. I just let him run through the paint and over the papers. That project took a small little boy from cabin fever to playing in 60 seconds. Josh actually hurt himself laughing, laughter that brought nurses from the next room over to check on us. They found me grasping his wrists and helping him jump up and down on the paper to make the magic foot prints. All this while receiving cancer treatment. Art was Josh's lifeline to childhood.

Josh’s older sister, Penny, didn't take part in any of the art projects through the hospital. The one time she did art at Children's was sitting at the little table in the clinic infusion room with Josh's psychotherapist. Penny had been having small anxiety attacks and nightmares about being abandoned. The therapist asked Penny to color with her while they talked about her dreams and fears. I was so worried about her, worried what the anxiety of having a sibling fighting cancer was doing to her, worried it was scarring her. Her therapist showed me the picture Penny had drawn—a picture of Penny, me, Josh and the therapist, all holding hands, all smiling. She then told me that whenever I was worried about Penny, to just ask her to draw with me, that those pictures would let me see what was really sticking around in her head. And in that picture she wasn't abandoned or scared or sad, she was with all of us—holding hands and smiling. Art was a world entirely under Penny's control, and it let me have a window into her state of being.

Photo by Melissa Riederer, Josh putting the final touches on his masterpiece.  To read more about Josh and the Riederer family, follow Melissa's blog.