All forms of art contribute to the uniqueness of a community. The arts transcend barriers of language, age, gender and cultural differences and bridge experiences across cultures. The arts accomplish the seemingly impossible task of revealing our differences across the globe while also managing to bring to light the threads that connect us—enriching our lives in ways nothing else can.

Many people say that travel broadens the mind. Spending time immersed in a different culture can certainly expand a person's horizons by revealing new customs, cuisine, a new language and the arts and history of the community.

Finding fresh inspiration, especially for artists, can be difficult in everyday life. Many artists seek out residencies in other cities and countries for this very reason—they want the opportunity afforded by travel and exchange of ideas between peers to enrich their creative development. Exploring a new environment and culture can encourage inspiration for an artist—and a residency allows the time necessary to focus and to bring life to that inspiration.

Columbus is a city committed to the promotion of multicultural arts dialogue by expanding our community’s access to the art of other cultures and enlarging the understanding of our own culture and that of the global community.

In order to build bridges with other countries, Columbus established its first sister city connection in the mid-1950s with Genoa, Italy, the common link being Christopher Columbus, the city’s namesake and Genoa’s most famous son. Since then, Columbus has established seven other sister cities with Ahmedabad, India; Dreden, Germany; Hefei, China; Herzliya, Israel; Odense, Denmark; Seville, Spain; and Tainan City, Taiwan. Sister Cities International is the national headquarters for sister city, county and state programs in the United States. In every region of the world, sister city partnerships play a significant role in supporting long-term community partnerships through reciprocal exchange programs. The Sister Cities International network represents more than 2,500 communities in 135 countries around the world.

The Greater Columbus Arts Council is helping to bring opportunities to experience the world to artists and help them gain inspiration from other cultures by working with sister city, Dresden, Germany through artist residencies. The Dresden Residency—a program of GCAC in conjunction with the Saxon State Ministry for Higher Education, Research and the Fine Arts—aims to facilitate an art exchange and create a dialogue between Columbus and Dresden artists and communities. The residency annually offers two Columbus artists the opportunity to undertake a three-month residency in Dresden, Germany. The residency program provides an extended period of time for a Columbus artist to concentrate on research and production of their art. GCAC provides round-trip international airfare, a living stipend, housing and a studio space in Dresden. Artists who reside in Franklin County, are not currently enrolled as a student and have either received one of GCAC’s Individual Arts Fellowships or have been selected as a finalist are eligible for the Dresden Residency program. 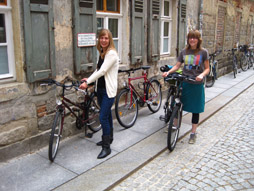 Dresden is located on the river Elbe in the eastern part of Germany, south of Berlin and close to the borders of the Czech Republic and Poland. Established in 1206, the city has a rich history as a royal residence and center of art and culture. From 1945 until the beginning of the reunification of Germany in 1989, it was under Socialist rule. Dresden is now the capital of the Free State of Saxony, one of Germany’s 16 states. The city is renowned for its impressive Baroque architecture and its collections of many important art treasures.

Nicholas Hill, board member and chair of GCAC’s International Committee, is a professor of art at Otterbein University where he served as Chairperson of the Department of Art for 10 years. Hill currently teaches printmaking and drawing classes and directs the Frank Museum of Art in Westerville.

Hill was among the first artists selected by GCAC to have a residency in Dresden in 1998. Hill continued building his connections to the German city when he returned in 1999 for a solo exhibition and was later granted a printmaking residency in Dresden by the Ohio Arts Council (OAC) in 2003. Hill also coordinated an OAC-sponsored exhibition of German and Ohio artists in Dresden in 2005 to coincide with the 800th anniversary of the founding of the city. Hill has since returned to Dresden several times to focus on his studio work and for a solo exhibition of his prints at the Kaethe Kollwitz Haus museum in Moritzburg, near Dresden in 2009. He plans to travel to Dresden again this summer to help organize an upcoming group exhibition of German and Ohio artists planned for 2012.

“GCAC’s exchange program has provided opportunities for Columbus artists to develop ongoing connections to artists and arts organizations in Dresden and in other cities in Germany,” says Hill. “Many of the recipients have gone on to develop important professional connections because of the initial investment of GCAC.”

Hill also notes that having the Dresden artists in residence here in Columbus enriches the arts environment with important and diverse points of view.

“There have been many exciting exhibitions in Columbus by both Dresden and Columbus artists that have offered innovative international perspectives.”

Hill says that serving as chair of the International Committee at GCAC has been a privilege.

“It has given me the opportunity to encourage Columbus artists to consider the opportunities offered by of the Dresden residency,” says Hill. “Anja Bruggemann, the GCAC staff member in charge of the residency program, has provided superb expertise in managing the program and providing both the Columbus artists and the Dresden artists with exceptional support. It is a pleasure to work with Anja and the committee as the exchange program continues to flourish.”

In 2010, multi-media artist Elizabeth Gerdeman and sculptor Shauna Merriman were the recipients of the residency awards and had their stay in Germany at the same time, from May to August, culminating in a joint exhibition of new work titled Apart at gallery geh8 in Dresden.

In November, GCAC’s International Committee selected two artists to receive international artist residencies in 2011--Danielle Julian Norton and Michael B. Hays were each awarded 12 week residencies in Dresden. Along with GCAC’s 2010 fellowship winners, their artwork will be shown in an exhibition at the Columbus Museum of Art through July 3, 2011. In exchange, GCAC will again welcome two artists from Dresden in 2011--photo/video artist Sylvia Doebelt and installation artist Paul Elsner.

Sylvia Doebelt arrived for her Columbus residency in mid-April. Doebelt’s interest in photography began while she was in high school. After various jobs in graphic design and video editing, she realized that she really wanted to “dive” into the arts. Doebelt began her studies at the Academy of Visual Arts in Leipzig in 2002, graduating in 2009. From 2004 to 2005 she spent seven months in Glasgow where she was an Erasmus scholar at the Glasgow School of Art.

Upon graduation, students were given information about various residencies organized by the Saxon Ministry of Science and Culture. “The GCAC exchange was on the list,” says Doebelt. “I thought it was an interesting coincidence since I had been here before in 1994 on a student exchange, which just had been established between the sister cities."

Doebelt says she’s enjoying her stay quite a lot so far, especially the company of last year’s exchange artists from Columbus, Elizabeth Gerdeman and Shauna Merriman.

“They've been showing me around and introducing me to people,” says Doebelt.

Though some artists arrive for their residency with a project in mind, Doebelt is letting her new environment guide her.

“Being a rather conceptual photographer, I usually don't work that fast. It takes me a while to respond to my surroundings,” says Doebelt. “There's one thing on my mind though. I have brought pictures that show me in and around Columbus in 1994 and I will try to find those places again. The idea is to re-stage those moments captured in the images back then, which is a strategy I extensively use in my work.”

Columbus artists Elizabeth Gerdeman and Shauna Merriman say the experiences during their residencies in Dresden had a profound effect on them personally and on their art making.  Because the residency allows artists to live and work in Dresden as more than a tourist, participants have the unique opportunity to become more intimately involved in the artist community there.

“The experience of living in a foreign country enriched my life,” says Gerdeman. “And now I have the opportunity to bring back my experiences to Columbus. As part of this residency experience, I hope to help further develop and maintain connections to our sister city, Dresden.”

Much of Gerdeman’s recent art involves exploring landscape, especially its loss and renewal, and its affect on cultural identity.

Gerdeman and Merriman were given space at Dresden's geh8, a collective of artist-run studios and exhibition space.  The space is also occupied by musicians, urban planners and architects.

“It was an extraordinary experience to focus on art making full-time in this atmosphere of interdisciplinary exchange and throughout the development of relationships with other artists in Dresden and Leipzig,” said Merriman.

While in Dresden, Merriman focused her research on wax moulage (reproductions in wax of skin lesions, tumours, or other pathologic states) and medical history and hygiene at the Deutsch Hygiene Museum. She also travelled to Berlin to visit the Charité Medical History Museum.

At the completion of their residency, the two artists collaborated on a site-specific exhibition at studio geh8, titled Apart, which took two week to complete, with the assistance of many of the studio artists.

Gerdeman and Merriman have continued to develop relationships with artists from Columbus as well as Saxony. They are currently involved with past GCAC residency participants Mary Jo Bole and Melissa Vogley Woods in the Rooms to Let Temporary Art Space, which has been made possible through support from GCAC and the Franklinton Development Association.

Gerdeman’s works of mixed media paintings on paper created during her Dresden residency were recently featured during a one night solo exhibition, titled Wanderlust, at ItLooksLikeItsOpen Gallery in Clintonville.

To read more about GCAC's Dresden Artist Residency, past participants and more about Dresden, Germany, go to www.gcac.org.