As the most comprehensive online events guide and resource for arts and culture in central Ohio, ColumbusArts.com offers a virtual guide through the Columbus art world with a searchable database of events, concerts, performances and more. ColumbusArts.com is an engaging place for artists and arts organizations to share what they do, with an average of 30,000 users per month. The ColumbusArts.com Artist Directory allows visual, performing and literary artists to create a profile and portfolio to showcase their work—for free—and enables art enthusiasts to easily search for and connect with them. Our monthly ColumbusArts.com artist profile series features interviews with a few of the many talented individuals who make up central Ohio’s thriving creative community.  Local artist, Rich Stadler, has his creative hands in just about everything, from film to painting and voice-over work to graphic design.  But he's probably best known for his fine work as an actor in the local theatre community.

GCAC: Where are you from? Did you grow up in Columbus?

RS: I’m originally from Mansfield and came to live in Columbus when I was 10 years old – in the mid-'60s. I remember thinking how cool Columbus was. I distinctly remember being blown away by how cool the escalators were at the downtown Lazarus!

GCAC: When did you realize you had a talent for the arts and performing?

RS:  I guess I’ve always been interested in the arts in general. When I was 11 years old, my mom watched me drawing and she said ‘You’re really good! Some people go to school, go to college and get out and they 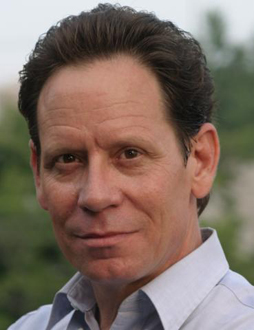 still don’t know what they want to do. But you already know what you’re good at—this is your gift.’

Both of my parents were in community theatre in Mansfield. And my dad was a “voice guy” – he did radio and was the emcee for Columbus’ Vaud-Villities starting in 1966, for about 14 years.

I kind of rebelled against the acting thing at first, not sure why. But I was in a production of 12 Angry Men when I was about 16 at Upper Arlington High School. I remember then thinking ‘this is pretty neat.’ And I was good at pretending. Good actors—they love pretending they’re someone else. I made up a phrase for it, too “Multiple Personality Order.” It’s fine if you want to pretend as long as it doesn’t drive you nuts!

GCAC: Have you had any formal training?

RS: I went to Ohio University for two years, 75-76, but I dropped out. I studied art, film and theatre. I did well in art, always got As and Bs. I do remember though in my first acting class I got a C! I’ve a feeling it was because I couldn’t pantomime eating an apple. I remember thinking ‘that’s not really acting is it? I’m not here for this!’ Somehow I got on the bad side of that teacher and so I got a C. It was like he was saying [imitating a stern, professorly voice] ‘you’re not trying hard enough, Mr. Stadler,’ or ‘this doesn’t seem to come naturally to you.’ I already knew what acting was about and I wasn’t going to give up or decide I was a C actor because I couldn’t pantomime eating an apple. You just keep trying, it’s what you do.

GCAC: What local companies have you worked with and productions have you done?

RS: I started out working with Worthington Community Theater. I did shows like A Chorus Line; a fun little production called The Nerd. Then I started working at Schiller Park with Actor’s Theatre. I was in the Music Man a couple of times.   In 2010 I did a production of the Music Man with the Pleasure Guild—a fundraiser for Nationwide Children’s Hospital for just four nights at The Palace Theatre. That was pretty cool. I played Mayor Shinn. When I was young enough to do it, I always wanted to play the lead, Harold Hill, but I never got it.  I've been in Jesus Christ Superstar - and a handful of other musicals.

GCAC: What types of projects do you find most fulfilling? Is there any one production that stands out in particular for you?

RS: In the early ’90s, my first show with CATCO was actually their very last show at their Park Street location, where Columbus Children’s Theatre is now. It was a production of Below the Belt. It was just me and Geoffrey Nelson and Jonathan Putnam—just the three of us. I remember thinking ‘I have arrived!’ And [Michael] Grossberg or [Frank] Gabrenya…I think it was Grossberg…said in his review of the show that “Stadler holds his own with Nelson and Putnam.” For local theatre it couldn’t really get any better than that for me.

GCAC: You dabble in a number of different art forms. Can you tell us a bit about that?

RS: What do they say? ‘A jack of all trades and master of none.’ I was more interested in movies and special effects and filmmaking before I got into acting. I enjoy the craft of making movies. I’m sort of a closet filmmaker, but I never had the money for any big projects. I know what really drives a project creatively is vision, but there’s also the money.

I love playing with my voice, imitating accents. 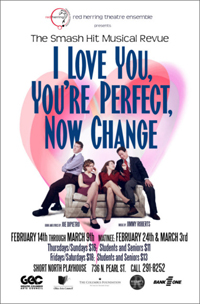 I’ve done some professional voice-over work for commercials, but I’d much rather do stuff like books on tape, instructional videos, narration.

I’ve worked with set design, though I’ve never been a set designer. If someone tells me a project needs to look like ‘this’—I can do that. I’ve done work in people’s homes, faux finishes, that kind of stuff.

I’ve created quite a few theater posters. I love doing poster art.  I’d do ones for plays I was in or for other local productions. I’ve worked with Pat Durkin, a local artist. Durkin designs specialty carpets. They’re like puzzle pieces, cut by hand, glued together and put on a special backing. I’ve never seen anyone doing anything like it around. I’ve worked with him since ’83. And I’ve always been his graphics guy for his promotion and other projects.

As often as not, I think of myself as a mimic, an imitator of sorts. Whether I’m drawing or doing voice stuff, I’m pretty much imitating. But I try to make it my own.

GCAC: Any theater projects coming up?

RS: Recently I’ve been working with the Drama Foundry. It’s a writers’ workshop that meets up at the Upper Arlington Library one Saturday a month. Different writers hire actors to read excerpts from their works. Tomorrow I’m reading a two-hour play—with no rehearsal! That’s funny to me. When an actor goes in to a workshop like this, they usually expect to do a 10-15 minute discussion. But this is two hours! I had to arrange for a rehearsal tonight. This is about New York people; I might have to do an accent.

If I didn’t rehearse, this other actor and I would be just meeting each other and just saying these lines for the first time and it wouldn’t meet the purpose of giving the author the chance to hear how it will sound. If we were doing it onstage, we’d have been rehearsing for four or five weeks. I think non-writers…I don’t know…actors can’t just perform magically. They might make it look easy, but it’s not easy. You do the practice just like everything else in life. You work hard to make it look easy.

When I’m not working in plays, it’s not like I have this feeling of ‘oh, I wish I could be doing something!’ I think I’ll go through this summer without acting. I’ll go watch and enjoy some plays instead of being in them.

Image:  A  poster Stadler designed for Red Herring Theatre.  To learn more about Stadler, check out his profile on the www.columbusarts.com Artist Directory.