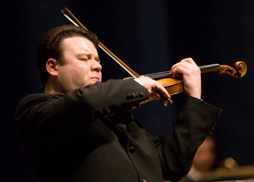 Returning to the Southern Theatre, Vadim Gluzman, world-renowned violinist, will lead ProMusica in a performance inspired by Mendelssohn. The performance features Schnittke’s Suite in the Old Style for Violin & Strings, Mendelssohn’s Octet, Schnittke’s Fugue for Violin Solo and Mendelssohn’s Violin Concerto in D Minor.  Born in Ukraine and raised in Israel, Gluzman has trained internationally, contributing to his masterful technique and vibrant style. Audiences and critics agree that Gluzman, known for his energy and passion, blends 21st century liveliness with the artistry of the 19th and 20th centuries.

According to Timothy Russell, Music Director of ProMusica, “Vadim Gluzman is one of the world's great performing artists, a violin virtuoso of the highest caliber and a communicative musician of incredible depth and understanding. He won the hearts of ProMusica audience members when he made his Southern Theatre debut as part of our 30th anniversary season. This visit he plays a dual role, both of soloist and ensemble leader. Audience members will hear him play solo violin, in a wonderful concerto by Felix Mendelssohn, and as a chamber musician in Mendelssohn's astonishing Octet. This is a one-of-a-kind musical encounter not to be missed!”

The 58th Annual Columbus International Film + Video Festival whirls into action this season with a kaleidoscope of films and events, from cows wanting to be hamburgers to children who travel alone through Mexico and into the U.S., green buildings, to a high school football rivalry that springboards into a story about money and class. Indeed there is something for everyone here.

This year the CIF+VF adds workshops to the mix, under the umbrella of the Film Council of Greater Columbus. With a workshop on how to use your video camera and another scriptwriting the Film Council’s workshop series gets underway. “They’ll be lots more coming after the main festival week," says Festival Director Susan Halpern. “We will be offering workshops throughout the year and into 2011”.

The Festival also has an awards ceremony where it bestows the coveted Chris Awards to filmmakers from around the world. The evening, which starts with a screening of animation and experimental shorts, wraps up with a party, Movies + Mead”. This year the Chris Awards evening is November 20 at 7:30 p.m. at the Canzani Center at the Columbus College of Art & Design. The films to be screened include an Ohio premier of world renown animator Bill Plymton’s The Cow Who Wanted To Be A Hamburger and fascinating experimental animation from Iran. The CIF+VF is the longest running film festival in the United States and “Shows Work You Can’t See Anywhere Else” in Columbus.

When & Where: November 16-21, but be on the lookout for Early Bird Events. For screening event times, ticket prices and locations, go to www.chrisawards.org. 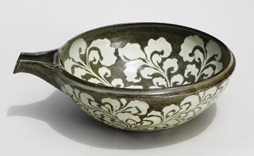 Masayuki Miyajima’s elegant, functional handmade pottery is steeped in a long history of ceramics in Japan. Deeply tied to the Mingei folk art tradition through his apprenticeship with Shimaoka Tatsuzo, a “Living National Treasure", his work preserves the value and inherent simplistic beauty of the pottery of Mashiko, the area known for Mingei ware. Miyajima will travel from the town of Motegi, Tochigi Prefecture, Japan to Dublin for this exhibition, which offers a rare opportunity for a first-hand experience with this fading tradition and its master artist.  Miyajima’s graceful ceramic artwork has sold out in each of his two previous visits to DAC.

“Miyajima’s artwork is imbued with the spirit of the artist, where a combination of body, mind and spirit blend," says David Guion, executive director of the Dublin Arts Council. "The whole of the object is important, as is its functionality. You will be intrigued by the luminous qualities of these unique fine-crafted artworks when you visit the DAC gallery."

“One thing that Shimaoka san felt very strongly about, for himself, was getting out into the world and to find ways to exhibit outside of Japan," says Miyajima about his teacher. "He was very well-connected and very well-known, so his work was sought out. After a certain age in his life, he felt that it was too difficult to travel and to organize exhibitions abroad. He was in New York, exhibiting, on 9-11 and was unable to return to Japan for several days. He stopped exhibiting abroad soon after that, but encouraged his apprentices to do so.

Currently there are only two of Shimaoka san's apprentices that exhibit abroad--Miyajima and one other artist.