November is National Novel Writing Month (NaNoWriMo)—an annual internet-based creative writing project that challenges participants to write 50,000 words of a new novel between November 1 and November 30. The project started in July 1999 with just 21 participants, but by the 2010, more than 200,000 people took part, writing a total of over 2.8 billion words. 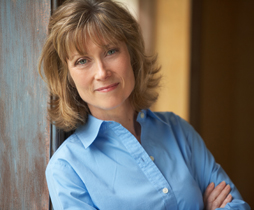 In honor of NaNoWriMo, GCAC recently interviewed a local writer, Carla Buckley, who has carved out a wonderfully successful career as a novelist. Buckley, a finalist for the 2011 Ohioana Book Award, is the debut author of The Things That Keep Us Here.  Named a Thurber House "New Voice in Fiction," Buckley chairs the International Thriller Writers Debut Program. Her novel, now in its second printing, tells a suspenseful tale of Peter Brooks, an Ohio university researcher, and his extended family as they deal with the onset of a flu pandemic that takes out 50 percent of those it infects.

Buckley’s new novel, Invisible, is slated for publication in early 2012. It's about a woman who returns home for her older sister's funeral, hoping to elude issues in her own life and dreading what she'll find in the small town where she grew up and where her sister died. What she discovers is a family in turmoil, an invisible threat to a town's safety, and the answer to her own identity. In a recent interview, GCAC learned more about Buckley and her career as a writer.

GCAC: Are you from Ohio? If not, what brought you here?

CB: I was born in Washington, DC, and moved quite a bit around the world as a child before resettling in the DC area. I attended college in Ohio and loved it here, so when the opportunity arose for my husband to take a job with OSU, I was happy to move here with our family.

GCAC: Have you always been interested in creative writing?

CB: I've always dreamed of being a novelist. As a child, I would persuade my friends to play the games that I wanted to play by promising them that I would name future characters in my novels after them. I'm still working through that list! I majored in English but it wasn't until I decided to stay home with our first child that I gave myself permission to get serious and write full-time.

GCAC: When did you realize that you were ready to pursue having your work published?

CB: I have always written with the intention of being published. It took me four books, however, before I found a literary agent willing to represent me and my work. We worked together for a number of years, and it wasn't until I moved here (which inspired my debut novel, The Things That Keep Us Here) that we were successful. In 2008, I signed a two-book contract with Random House, of which Invisible is the second, and we just sold my third book to them.

GCAC: It sounds like you had the opportunity to do some very interesting research while writing your debut novel (see WOSU's behind the scenes look at her research here). Was there any special research you had to do for your upcoming novel?

CB: As a non-scientist writing about scientific threats, I have to do a great deal of research to get up to speed. For Invisible, I interviewed scientists about the specific global threat I reveal during the course of the novel, and also delved quite deeply into the very moving topic of kidney disease, by visiting dialysis centers and interviewing transplant patients, people on dialysis, and medical practitioners. One of my characters has a passion for marine biology, and so I read everything I could find on the subject. Her passages are among my favorites in the novel.

GCAC: You've taught some writing workshops at Thurber House. Do you think teaching helps you with your own processes? What other opportunities/suggestions do you have for people in the Columbus area who are interested in honing or even just discovering their writing skills?

CB: I believe that one of the reasons I was finally successful in getting published was because I sat down with a screenwriter and learned out to structure the suspense novel according to the basic three act play. Over the past few years, I've adjusted that model to incorporate other plotting approaches which helps me maintain suspense and see the big picture before I write the first word. I am passionate about sharing what I've learned with aspiring novelists, and putting together workshops has helped me parse out what I believe works, and what I think doesn't.

Writing is a solitary pursuit, and getting to know other writers along the way makes all the difference. I attended classes and joined writers' groups wherever my husband and I relocated, and I always encourage beginning writers to do the same. There are various writers organizations in the Columbus area, such as Sisters in Crime of Columbus Ohio and Central Ohio Fiction Writers, where writers may not only learn about the craft, but meet other people pursuing the same dream.

More about NaNoWriMo: Writers wishing to participate first register on the project's Web site, where they can post profiles and information about their novels, including synopsis and excerpts. Word counts are validated on the site, with writers submitting a copy of their novel for automatic counting. Municipal leaders and regional forums help connect local writers with one another for holding writing events and to provide encouragement.