As the most comprehensive online events guide and resource for arts and culture in central Ohio, ColumbusArts.com offers a virtual guide through the Columbus art world with a searchable database of events, concerts, performances and more. ColumbusArts.com is an engaging place for artists and arts organizations to share what they do, with an average of 30,000 users per month. The ColumbusArts.com Artist Directory allows visual, performing and literary artists to create a profile and portfolio to showcase their work—for free—and enables art enthusiasts to easily search for and connect with them. Our monthly ColumbusArts.com artist profile series features interviews with a few of the many talented individuals who make up central Ohio’s thriving creative community. This month's profile features acclaimed local playwright, Johnrick Hole. Hole has been a fixture in the Columbus theatre scene for more than 25 years and is still going strong. To celebrate the Columbus Bicentennial, Evolution Theatre Company, a collective of artists whose goal is to expose Columbus area audiences to new works and revision classics, will host the Bicentennial Playwrights Festival, featuring local writers' tales about Ohio's fabulous Capital City. The Festival will feature six new, never 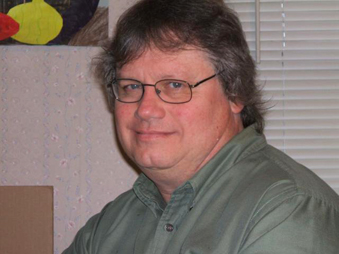 before produced one acts plays, including Hole's Room Service? Send Me a Room!

GCAC: Are you from Columbus? How long have you been a part of the theatre scene here?

JH: I moved to Columbus in 1984 and I love it. The arts, the neighborhoods, the parks, the libraries. the people- this a great place to call home. I started in theatre in 1986 by volunteering to help build sets for Columbus Repertory Theatre, which was a resident repertory company that had three seasons in the building that is now the Athenaeum. I wanted to learn how theatre works- I thought observing the process first hand would be helpful and it was extremely so. When they closed I started volunteering at CATCO and eventually participated in the CATCO Playwrights Workshop. CATCO, as part of the 1992 Solo Shorts, produced my first play, Eat or Die, which was directed by Linda Yerina Zuby and acted by Ted Amore. It’s a comedy about a man who survives a plane crash in the arctic wilderness of Alaska, and there’s nothing to eat but Pete, the dead frozen pilot. The first time I sat in an audience and felt them respond to what was happening on stage, I had to grab my seat with both hands to keep from bouncing off the walls.

GCAC: What inspired you to get involved with theatre and with playwriting in particular?

JH: When I was much younger I thought I was a novelist, I had read everything by John Steinbeck and Kurt Vonnegut and thought there would be nothing else to read for the rest of my life. I had read some plays but I had only seen a handful. In 1985 someone who loves theatre took me to a Denison University production of Crimes of the Heart by Beth Henley and I was blown away. The power of the immediacy of the story unfolding now, in front of us, that exchange of energy between the actors and the audience- and there I discovered my purpose is to write plays.

GCAC: How do you find each play’s voice? Where do you look for inspiration?

JH: Each play seems to have a voice of its own, which comes from me, so hopefully I find the voice that makes it the best play it can be. The plays start with an image, sometimes I imagine it, sometimes it comes from something I see in life, or a photograph or painting. For example my play Roadkill by Moonlight, which was produced at MadLab, (directed by Janetta Davis, and with Jennifer Barlup and Rich Stadler) started with my imagining a young woman at a bus stop in a dangerous part of town late at night and a young man approaches her. My play Nighthawks, which was done by Red Herring Theatre (directed by Ionia Zelenka and with Kim Ryan Turner, Michael Herring, Dave Morgan and Rich Stadler) started with the Edward Hopper painting of the four people in a diner late at night, like I even need to describe it. From the image the questions start coming- who are these people? What the hell are they doing? What do they want? What’s stopping them? How do they get it? What happens next? Where does it go? How does it end?

GCAC: Are there common themes or ideas in your work that you return to over again?

JH: People have pointed out to me that food seems to be a recurring element. That may explain my struggle with my weight. Struggle is a good word- it seems the characters often struggle to do the right thing, to be a good person, a good friend, lover, spouse, employee, citizen, and it ain’t easy for them, but hopefully it's compelling to the audience.

GCAC: Tell us a bit about the Bicentennial Playwrights Festival and your new play, Room Service? Send Me a Room! How was your work chosen to be a part of this event?

JH: The Bicentennial Playwrights Festival is being produced by Evolution Theatre Company in association with CATCO and is part of the Columbus birthday celebration. It's quite gratifying that theatre and playwrights are being featured in the festivities. Evolution Theatre put out a call for plays and a panel selected six for the festival. Room Service? Send Me a Room! started with the image of a man in a Great Southern Hotel room and there’s a room service set-up for dinner for two. The man is hungry but he can’t eat because it's a romantic dinner for two and his wife is camped out in the bathroom and then he hears what he thinks is a seal barking in the hall. The scene is inspired by the James Thurber drawing of a man and woman in bed and the woman says “All right, have it your way-- you heard a seal bark." And of course, he did [according to the drawing], because the seal is perched right over the couple's bed on the headboard. So [in the play's hotel scene], there's food and a man trying to do the right thing, but he's at cross-purposes with his wife, which I suppose makes it somewhat representative of my plays.

GCAC: What is it like being a playwright in Columbus? What is unique about working here?

JH: In one sense I'm sure it's like being a playwright anywhere- it's hard as hell to get produced, and that is the case everywhere. Theatres of all types and at all levels of production are taking a huge risk with whatever resources they have and their future when they take on a new play. I am very grateful to the audiences, staffs, boards, and artists of CATCO, UpStage Productions, Red Herring Theatre, Reality Theater, MadLab, and Theatre Daedalus for producing my plays. I’ve had eight short plays and three full-length plays produced in Columbus. I’ve managed to get a few things done outside of 270, and I would love to have my plays seen by more audiences and in other cities and I’m working on that, but I’ve sat in paying audiences in Columbus and heard them laugh at my comedy, so if you planted me today, it would be with a smile.

I’ve been very fortunate, as the opportunities for support in Columbus have developed as I’ve grown as a writer. When I started writing there was the CATCO Playwrights Workshop, founded by Geoff Nelson. CATCO has done seven Shorts Festivals, which provided many, many playwrights the opportunity for professional development and production. My first production came out of the CATCO Playwrights Workshop in 1992, and in 2000 Mr. Peepers Goes To Hell was part of the Shorts Festival and I received an Artistic Excellence Award from the GCAC. With Dan O’Reilly, I was a coordinator for The Playwrights Workshop at Milo, which did a production with Red Herring Theatre, Head Cheese and Conga Lines, that featured Columbus playwrights and earned a GCAC Artistic Excellence Award for Red Herring. I’ve had two plays in the MadLab Roulette, which is the longest running new play festival in Columbus. For the past few years I’ve participated in the Drama Foundry, a writers group for all forms of dramatic writing. Columbus theatre seems to be in a period of growth in the past five years or so. Available Light, Columbus Civic, Evolution, for/word, New Players Repertory, Raconteur, Shepherd Productions, Short North Stage, Solstice and Theatre Daedalus have all arrived since 2006 and it’s a smorgasbord for theatre lovers. Five years ago it seemed like I could get out once or twice a month and see everything I wanted to- in the past few years there have been stretches when I’m out every week and can’t get to everything I want to see. There is a wide and deep pool of professional caliber actors, directors and designers in Columbus. I have been extremely fortunate to work with many of them.

To learn more about Johnrick Hole, visit his profile in the ColumbusArts.com Artist Directory.  Are you a local artist or performer?  Sign up for your free profile today!  Click on the "Create an Account" link at ColumbusArts.com/artists.